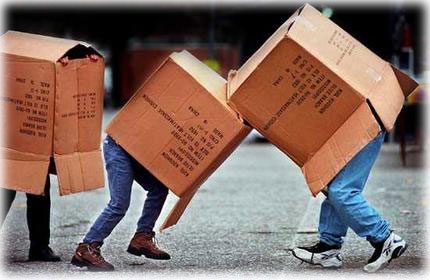 There’s a belief that in order to be truly creative, marketers must unshackle themselves from anything that could hinder their process. Give them their creative freedom. Let them have no bounds. The sky’s the limit. FLY ICARUS, FLY!

In other words, we want them to “think outside the box.”

But marketers are like toddlers on Christmas morning; they can do much more with the packaging than the $150 toy inside. In principle, when we take away the box, we’re taking away the very thing that creative minds need for creative endeavors; parameters and limitations. Unchecked freedom kills the creative process.

Let’s say you’re a film producer. You’ve hired a director to make a your next blockbuster film. Metaphorically, the project lies inside a box. The box itself is the limitations that hold the director inside: budgets, schedules, locations, cast and crew, weather, etc.

Then, one day, those limitations (the box) aren’t an issue any more. So, you decide to open the box and let the director out. Now, the director sees lush landscape all around her: beautiful fields, majestic mountains, lush forests and glowing cityscapes to the horizons – boundless opportunity. Sounds great, right?

The director sees a multitude of options but loses sight of the most important aspect of the film; what’s inside the box. Now there’s too many choices; complicated shots, new actors and dazzling digital effects. The film becomes a smorgasbord of extra appendages that complicate and hide the story.

Like the director, if marketers are willing to stay inside the box, they’re significantly better positioned to face challenges and problems with ingenuity and creativity. This space creates not only opportunities for innovative thinking, but it also develops the discipline to ask a critically important question, “Do these choices serve the project or am I doing it because I can?”

Constraints Foster Creativity
In 1977, George Lucas lived inside the box. When he made Star Wars, budgets, technology and locations limited him. Still, it was those very parameters (the box) that helped him creatively solve all his problems. A desert landscape became an eclectic planet. A crude puppet turned into a Zen master. Small, hand-built toys morphed into massive space vessels. All the while he never lost sight of what was important – the story of a young man, Luke Skywalker, and his journey to becoming a hero.

Flash forward to the 1990s – Lucas is a billionaire. He owns an effects company (ILM). No one tells him, “no.” The result? He made a Star Wars prequel that’s widely panned by critics and fans.

Lucas was let out of the box. He lacked boundaries. He lost sight of all that was important to making a great film. Lucas did what he wanted because he could. He never asked THE question: “Does this serve the film or am I doing it because I can?”

Respect the Box
When marketers approach their work with a “think outside the box” mentality, it hinders their creativity, innovation and, ultimately, productivity. They become stymied by too many decisions and a lack of focus. They don’t know what’s important and they focus on different for the sake of different.

The audience suffers. Results waver and decline. And everyone gets frustrated.

As marketers, we complain that we don’t have enough (fill in the blank – budget, time, resources, etc.). But it’s important to train our brains to live inside the box, to welcome limitations and to allow them to present solutions in the name of creativity. It will help when marketers do venture out and see the forest apart from the trees. After all, while necessity stands as the mother of invention, limitation serves as the mother of creativity.