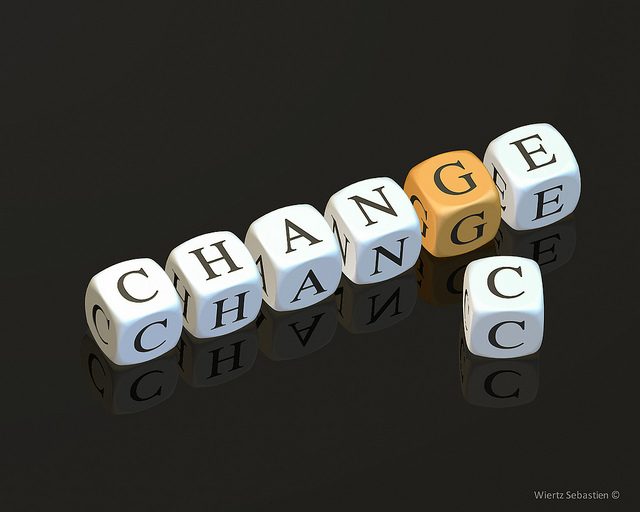 Change never comes easy. Whether it’s a detour on your way to work or restructuring an entire company, few people take change in stride. In fact, one study found that 70% of change efforts fail and 29% are launched without any formal structure whatsoever. If people don’t see the need for change, it’s impossible to get buy-in and support.

What does this mean for marketers wanting to drive change within organizations?

Regardless of how much you believe change is inevitable or a great idea, you’re bound to run into resistance. But if you understand the psychology behind why people don’t want to change and the basics of change management, you’re ahead of the game. You’ll be able to prepare you, your team and the rest of your organization for change and create a greater chance of success, rather than feeling like you’re dodging minefields.

This is crucial for marketers.

One, because if we think that we don’t have to change, then we’re completely out of touch with what’s going on with our customers because, get this, they’re changing. And if they’re changing, we have to do so even faster.

Two, as the one group that touches every other department in the organization, it’s natural for us to set the foundation for change. We need to create agile cultures that continue to adjust over time, not elastic ones that snap when stretched too much. But agility doesn’t mean flying by the seat of our pants. It means being strategic and being smart about how we adjust and when along the way.

Prepping a group, a department or an entire organization for change is the most important part of ensuring that change is successful. People cling to what they know, even if it’s stifling, awkward or uncomfortable. We need to think about how we want to move people from where we are now to where we want them to be. Pleading, cajoling and demanding won’t work.

Instead, here’s five stages of change that every marketer needs to keep in mind:

Why do we need to change?

People won’t change until they understand the rationale behind it. Changing when things are rough can be easier than when things are good. It’s easier for employees to see the fast-approaching cliff they’re about to fall off of. When times are good, no one wants to risk messing up a good thing. Good is good, why risk it for something that may be better but it’s not a sure thing? And, why should we change when there’s money in the bank and business coming in the door?

This is where the pain or gain comes in.

If things are bad, the “why” is about how to avoid that inevitable cliff. The status quo will never keep you where you are, and employees fear what may happen if the company keeps plugging along. This is what happened to brands like Blockbuster. They kept going along even though things got worse and worse and what happened? Well let’s just say you probably didn’t spend last weekend watching a movie you rented at Blockbuster. Focusing on pain is how companies motivate change.

The other side is gain – in what ways will change make the company better? What do we have to gain? If there’s no immediate pain to avoid then focus on inspiring employees. How can we be a better version of ourselves? Everyone wants to work at a company that’s ahead of their time. That’s hip and on the edge. Show people what the future can look like and they’ll light the fire under themselves to make change happen.

Where are we going?

How will this happen?

Just like when you start packing for a trip, you want to know how you’ll get there…plane, train or automobile? The same applies to people you work with. Help them understand the gap between where you are today, where you want to be and then how you’ll build a bridge between the two. It doesn’t matter how big or small that span is, breaking it up into small pieces will make it easier for people to get their head around.

When will it happen?

Is this something you’ll roll out over the next three months or the next three years? Give people a time frame for a sense of context. It helps them understand if this is a marathon or a sprint. It puts their minds at ease about whether they’ll be able to take the vacation next summer that they planned with their family. These might seem minor details to management, but in an employee’s eyes, they want to know if their work and personal life will be disrupted because of change.

The WWIFM may be the most important thing to communicate – what’s in it for me? If employees are to pay attention, they have to understand how change affects them personally. Will it change my paycheck? Make my work harder? Will I have to move to another office? The list could do on and on, and it’s critical to communicate to employees what they can expect, personally, when they come to work every day.

Managing change isn’t much easier than change itself. But most of the mistakes that companies make happen because they didn’t think things through upfront. If people understand the reasoning behind what’s going on and how it affect them, you’ll not only have willing supporters, you’ll have active contributors.