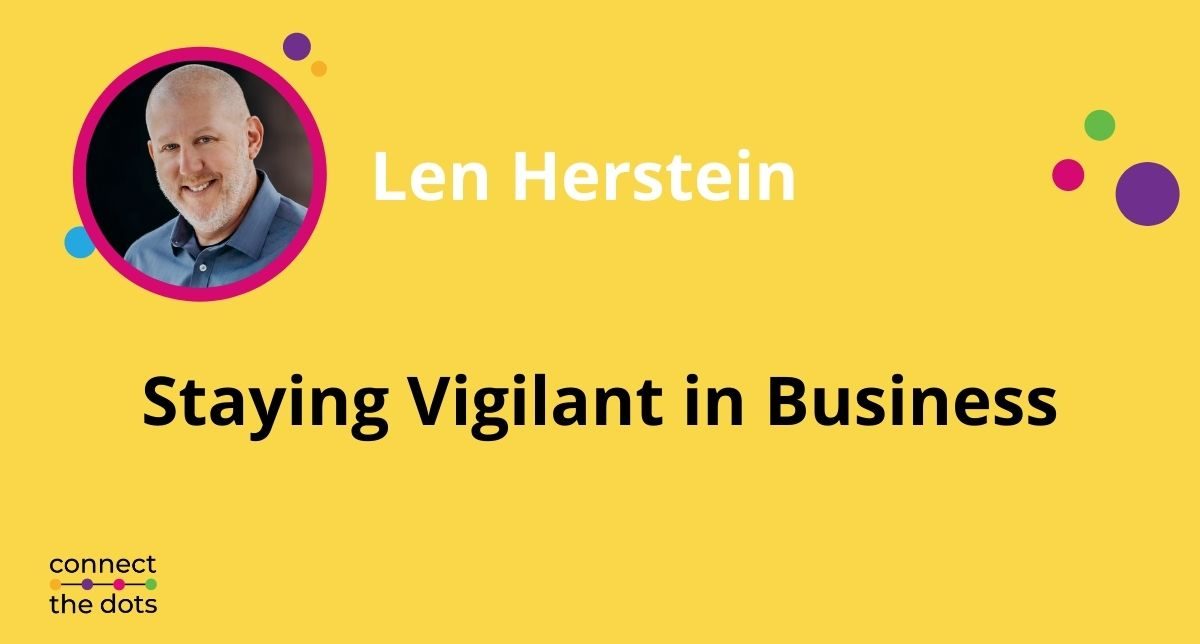 There’s a lot of struggles that come with climbing to the top of a mountain. And once you get there, the view is fantastic. Aaahhhh….you’ve arrived! But now what? How do you stop the harsh winds from knocking you backward, causing a massive snowball effect that forces you back to where you started? That’s easy: Vigilance with a capital ‘V.’ Being vigilant is about fighting off the urge to stay complacent. This helps you identify your blind spots and see potential dangers that could ruin everything you’ve worked so hard to accomplish. Vigilance builds the protective shield around everything you’ve built through relentless hard work and passion.

As an entrepreneur and marketing executive, Len Herstein knows firsthand why companies and people fall victim to complacency. As a producer of the Brand ManageCamp conference, he knows that when you’re on top of your game and the winds of change blow hard, your vigilance is how you navigate unchartered territory.

Probably his most unique lesson on why vigilance matters so much are Len’s role as a volunteer police officer. His latest book, “Be Vigilant: Strategies to Stop Complacency, Improve Performance, and Safeguard Success,” combines these different aspects of his life to bring a unique perspective on fighting complacency with active vigilance that protects everything you’ve built.

Top three takeaways from my conversation with Len Herstein

Vigilance is just as important in the police force as it is behind your desk. “We learned right away in the academy that complacency kills in law enforcement. At the same time, it became really clear to me that complacency also kills brands. It kills businesses, it kills teams, it kills organizations, and it kills personal relationships. The opposite of complacency isn’t paranoia, it’s vigilance. Paranoia is the fear of potential threats and vigilance is the awareness of it. We want to be awareness-based.”

Tunnel vision can stop you from noticing your surroundings. “Successful businesses tend to focus on major threats. If I’m Coca-Cola, I’m really focused on Pepsi. If I’m Apple, who’s my Microsoft? Eventually, we start losing sight of what’s around us. We need a 360-degree view that shows all the different places that threats could come from. We need to be aware and plan ahead. The worst time to figure out what you’re going to do in a crisis is when you’re in the crisis.”

Don’t forget to debrief, even when you have some success. “People don’t debrief when things turn out successful, which is a problem. There might be an overall net success, but not everything that happened during that project mission went right. Maybe our competitors dropped the ball that opened a door for us. If we only do debriefs based on the outcome, we’re losing a lot of opportunities. That is going to come back and bite you. Eventually, those weaknesses are gonna overtake the strengths. It’s going to seem like it happened overnight, but it didn’t. That’s why debriefs are so important.”

Want to know more about how to stay vigilant and fight off complacency? Check out Len’s book and watch the rest of our conversation about staying on top of the mountain and maintaining your hard-earned success.