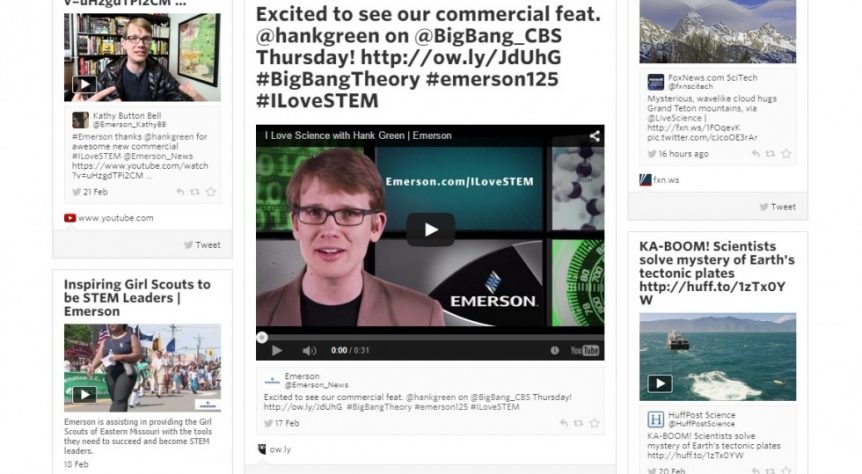 One of my favorite quotes from marketing icons about B2B marketing is that it doesn’t mean “boring-to-boring.” And, while logically we know that doesn’t have to be case, it’s rare that hard-core B2B companies do anything to break that stigma.

Of any B2B company that’s earned the right to stay in the obscure, gray corner of nondescript marketing, it’s Emerson. The company’s 125 years old, it’s stocked full of engineers, it’s global and it’s as industrial as a company can get.

No creative soul comes out of B-school and jumps for joy at the thought of doing the same thing a company’s done for more than a century. Except that Emerson turned the stereotype of a staid, boring company into some of the smartest brand storytelling around. They’ve been doing it for years, and now they’re making the entire science ecosystem stand up and take notice.

It Didn’t Just “Happen”
For more than a decade, CMO Kathy Button Bell and her team have been evolving the company’s story. She’s not only reengineered the brand within its industries, but she’s also elevated the credibility of marketing and its ability to drive business growth along the way.

Last week, Emerson created an entirely new set of expectations for brand storytelling. In honor of the company’s 125-anniversary, Button Bell partnered with Internet and science celebrity Hank Green to inspire and empower the next generation of engineers and scientists through its #ILoveSTEM Campaign.

But why partner with a self-proclaimed science nerd to talk about science, technology, engineering and math (STEM)? Because, as Green tells it, they both have the same goals – to get more people interested in science and engineering.

From Stories to Experiences
The genius of Emerson partnering with Green is enhanced by the fact that they first aired the ad during The Big Bang Theory. Geared toward a younger, science-geek audience, The Big Bang Theory reinforces the hip outlook that Emerson wanted to convey and provided a natural context in which to tell their story.

The beauty of Emerson’s work is that they’ve built longevity and are smart about how they’re executing on the story. This isn’t a three to six-month effort that will soon be shelved. They’ve successfully made the leap from traditional storytelling to creating true brand experiences for  broader audiences – those young and hip who they hope to recruit into the profession as well as senior business executives who they still target. And they’re bringing the rest of the science fans with them.

How to Create a Killer Brand Story
It’s clear that the Emerson team didn’t just think strategically, but thought about how to truly innovate when it came to creating purpose-driven content around their brand story. “We want to make science cool and show how Emerson is progressive and authentic,” Button Bell told Advertising Age.

Here’s how they did it:

Emerson, you didn’t just reinvent brand stories, you may have also recreated bedtime stories. And for that, marketers everywhere owe you a big high-five for raising the bar for what we say “YES!” to.

Carla is a world-renowned storyteller, an entertaining speaker, and a prolific author. Having lived, worked, and studied on five continents, she's partnered with top brands and conferences to train thousands of people how to rethink the work that they do andth impact they can have. her visionary expertise has inspired and equipped leaders at all levels to embrace change, welcome new ideas, and transform their business.

Her work with Fortune 500 brands served as the foundation for many of her books. Her tenth, RE:Think Innovation (due out early 2021) busts the myth that innovation is something that requires a specific degree or special training. in fact, Carla explains why, to be a successful company in today's hyper-competitive, customer-driven world, innovation must be everyone's business. Her goal is to teach one million people how to become innovators by 2025.