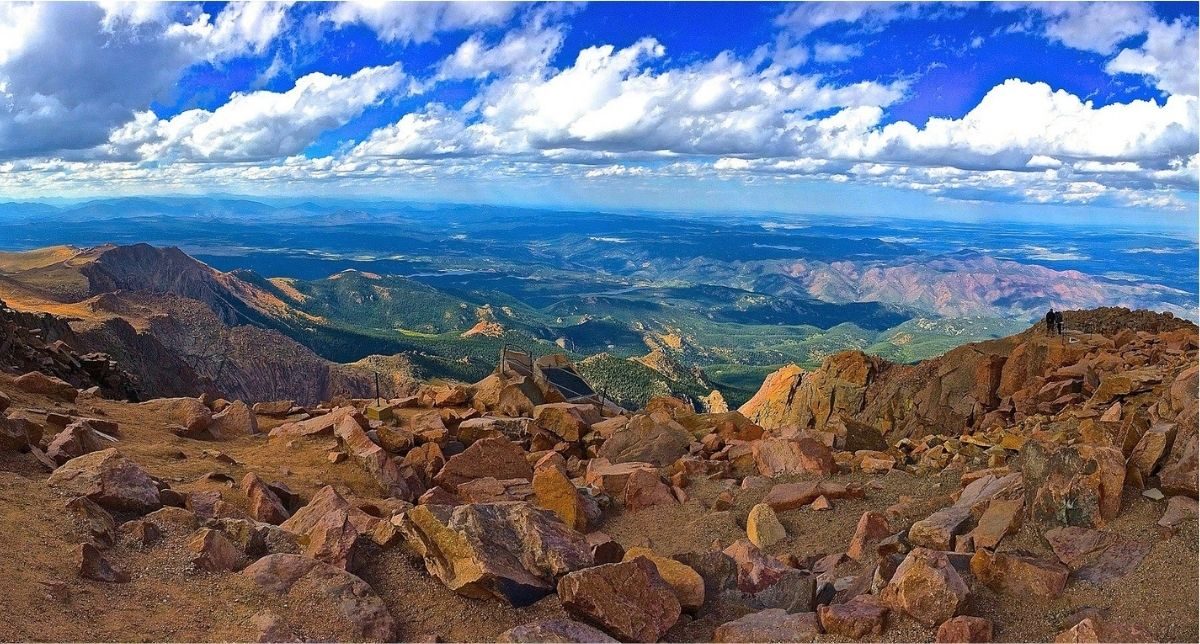 It was the end of teaching a summer course in Colorado Springs, and Katharine couldn’t wait for one last adventure before she returned to Massachusetts. The group headed out to Pike’s Peak, one of Colorado’s 58 fourteeners—a mountain that tops out at over 14,000 feet. After a ride to the summit, she took a long, deep breath and savored the 360-degree view.

As a college professor, scholar, former journalist, and social activist, Katharine was also a prolific writer. She cared deeply about urban poverty, social injustice, and sexism—and how to right them. As she stood atop the mountain, the memories of what she’d observed on her travels across the country came flooding back, sights such as the white buildings in Chicago and the wheat fields of Kansas. She was struck by the expansive views of the plains spreading out into the distance and the emotions the experience evoked in her.

When she got back to her hotel room, she began scribbling out the lines to a poem, which she finished before she left Colorado Springs. She’d set it aside for a few years before submitting it to a publisher to commemorate the Fourth of July. Once it was distributed to the broader public, Katharine was taken aback at how fast people picked it up and its overwhelming popularity. Eventually put to music, this poem took observations of the good and bad within a country, distilled it into a people’s optimism about the future, and related that into her own work as a writer. The result is one of the most extraordinary songs in US history: “America the Beautiful.”

How to find inspiration for great ideas

At the top of Pike’s Peak in 1893, Katharine Lee Bates didn’t set out to write words that described the idealism of a country. She didn’t intend to pen a song that rivaled “The Star-Spangled Banner” as a national anthem. She simply connected the dots between what she’d observed in her travels, distilled them into a pattern, related that into her work, and out came the idea for her poem—one she no doubt edited many times to get it just right before she pitched it to a magazine for publication, and one that’s had an extraordinary impact on generations of people.

Katharine never held an official innovation title in any of her jobs, yet she was one of the most prolific innovators in history. Her work consistently delivered extraordinary outcomes. As a professor at Wellesley College, she mentored young poets such as Robert Frost. She helped establish American literature as a field of study in college. Katharine traveled internationally and earned a master of arts degree during a time when women barely left the comfort of their parlors. As a journalist, she sought to change stereotypes of down-trodden people. As a social activist, she considered herself a global citizen who worked fervently for world peace.

Rethinking our definition of who innovates

Katharine is only one example of why we need to rethink how we define innovation, who’s involved, and how it’s done. Because we’re leaving a significant number of opportunities on the table that can make an extraordinary impact on the world in which we live.

Innovators aren’t just the CIO’s, entrepreneurs, inventors, executives, or people awarded innovation titles: we all have the potential to innovate. Before reading this blog, did you consider one of the United State’s greatest tunes to be an innovative piece of work? Most don’t! Katharine is only one example of why we need to rethink how we define innovation. It’s by doing so that we unlock our potential between everyday inspiration and monumental opportunities.