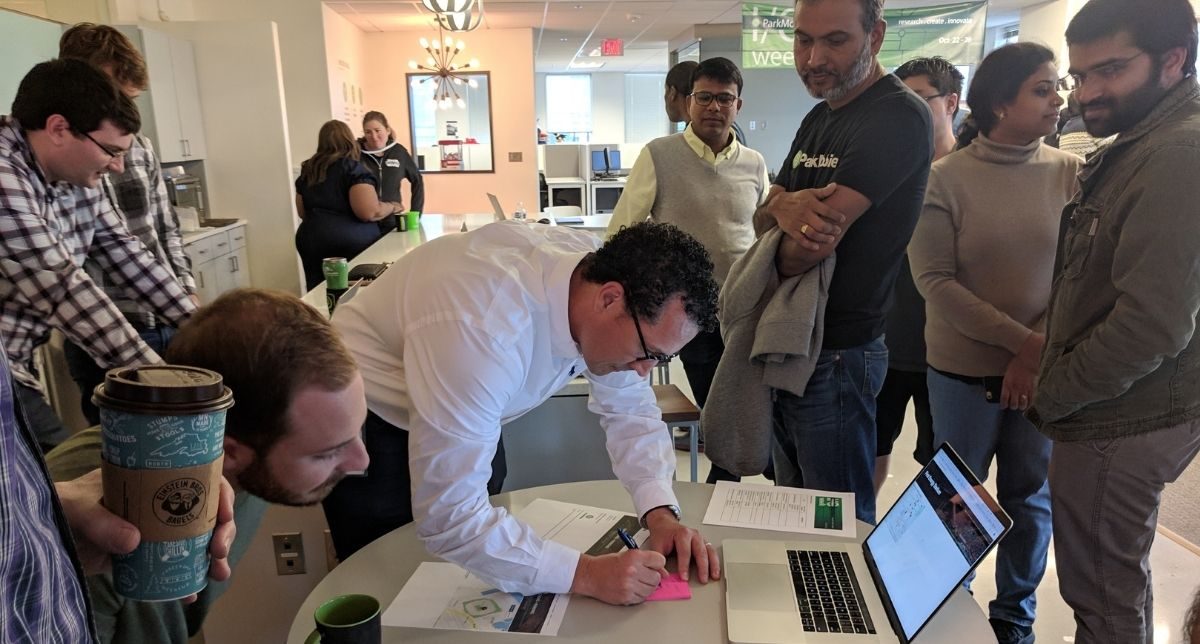 It’s happened to all of us. We’ve missed the window to feed the meter and ended up with an annoying parking ticket. A sudden storm hit, and we got drenched in the rain between the garage and the concert venue. Or we’ve been late to an important interview because we couldn’t find a %$*&#! parking spot!

When it comes to parking, “innovation” isn’t an image that readily pops into our heads. Instead, it’s visions of asphalt slabs and concrete boxes. It’s cars circling the block…again…fingers crossed for that elusive open slot.

That’s where ParkMobile comes in.

ParkMobile was founded in 2008 to give people an option to find and pay for parking right from their phone using an app. Today, the company serves 400 cities, including eight of the top 10 US urban areas. The growth of the company has come from its ability to build a product that’s right for the market, which is how they’ve grown to more than 18 million users.

Innovation has been at the heart of the company from the very beginning. It took a big jump, though, when chief technology officer Matt Ball came on board in July 2018 and launched the first Innovation Week at the end of that year.

“Our approach has been broad-based across the company,” said chief marketing officer Jeff Perkins. “We invited every team in the business to be a part of one week that just focused on innovation. Whether they were in finance, engineering, customer service, we said you can be a part of innovative ideas.”

ParkMobile’s support of Citizen Innovators flies in the face of many brands’ approaches. Jeff explained the backstory: “I’ve seen companies create innovation labs or buy a place in a tech center. Or there’s an innovation lab that sits within the corporate headquarters. Both always end badly. If there’s only a few people focusing on innovation, what’s everyone else doing? It doesn’t bring the rest of the company along with them, and it creates resentment. The goal isn’t to create an innovation island, but to get great ideas to come out of all parts of the business.”

Matt knew he needed to draw out new ideas in the IT and engineering department and wanted to set the tone right off the bat. His intent was to give his team a week in which they worked on nothing to do with the core business and everything that led to the future of the company and the parking industry.

In planning the week, Matt and Jeff asked people on the IT and engineering team to create a list of projects to work on. These teams then recruited others outside their department to join them. This worked because some employees were more comfortable contributing than leading. It created a way for everyone to be a part of innovation, because they drew from their background and their on-the-job know-how.

By tapping into the entire base of Citizen Innovators, ParkMobile harnessed the collective genius of the organization. While the myth of innovation is that it has to be on the scale of a Tesla, a drone, or a flying car, Jeff and Matt knew it could be the smallest of things—it simply needed to make an impact.

How to pitch ideas

When it came time to present ideas, employees showcased their projects, which built excitement about their potential and the impact they could have. Teams went in front of a group of judges, which included the ParkMobile leadership team, internal employees, and surprise guests, and pitched their ideas.

During their pitch, each team had to explain how they set up the problem they solved, show how the solution solved that problem, and how it impacted ParkMobile. Then they had to sell the judges on why their solution was innovative based on predetermined criteria such as:

– Is it big and transformational? Or is it smaller and has a significant impact?
– Is it realistic? Can we execute and market it?
– How big of an opportunity is this for our company? Will we have a significant upside?
– What’s the coolness factor? Would employees and customers get excited about it?

The pitches were all over the board, from building an app for the Apple Watch to voice recognition for Alexa. One woman in the finance department pitched an idea for how her team collected and reconciled data. She had seen that at month end, she had to pull data from different financial sources, dedupe and clean it, then send it to someone else on her team to reconcile. During innovation week she taught herself how to program in the R language and automate it. The woman took a two-week process that required 40 human hours and turned it into a 10-minute automated tool. Her idea relieved her and her team of miserable, repetitive work and freed them up for things that were more interesting to them and valuable to the company.

“We often think of innovation as something that changes the world,” pointed out Jeff, “but she changed the world of finance by dealing with the slog. The fact that someone from finance received recognition set the tone that innovation comes from anywhere. It isn’t just what and how you bring something to market. It’s also about the operational efficiencies that make you better as a company, so you can move faster and get more done.”

How to create an innovation culture

In looking at the overall culture of ParkMobile and their approach to Innovation Week, there are several reasons why it’s so successful. Whether you’re a large, legacy corporation, a freshly minted start-up, or somewhere in between, these lessons are universally applicable.

First is that the focus on innovation comes from the top.

Jeff explained, “We’re fortunate to have a CEO who’s highly innovative, has a well-defined vision for the company, and where he wants it to go. That’s why he pushes hard on every team to be as innovative as possible and made it a core competency of the entire company.”

Second, leadership has infused innovation throughout every level of the company as a way to serve customers.

ParkMobile knows its place in the life of its customers—they’re a parking app, not a lifestyle app. But by constantly putting their customers first, they’ve been able to remove friction for people using it to park, help their city administrator customers make parking easy for residents, and help government organizations manage the process of payment and future planning.

Third is dedicated time for innovation.

“In many businesses, management wouldn’t have allowed everyone to take a week off,” Jeff said. “Or they’d say do your day job on top of it. But we’ve seen big returns from this. People appreciate it and it was the highlight of the year. It gave people a chance to show what they can really do when they’re not encumbered with the fire drills of the day.” It shows in the feedback from everyone, starting with the top of the company.

CEO Jon Ziglar explains, “Innovation Week is really important for ParkMobile. It’s a chance for all of our folks to get together and spend time thinking about what they would do for the business. We’ve got incredibly dynamic and interesting people with great ideas. Giving them the free rein to create without restrictions is a great thing for us, and ultimately, it’s a great thing for our clients.”

Product manager Joy Guerin says, “Innovation Week is a great opportunity for the engineers, the product managers, and really anyone at ParkMobile to get involved with new ideas…the ideas that are just floating around in our minds, the what-if.

Jamaal Hutchinson, a software development engineer, adds, “Innovation Week gives us the opportunity to create something that is important to us and really makes an impact.”

Innovation Week is a reprieve from the grind of day-to-day work. Granted, it’s the nature of the beast to have to do repetitive work and fix bugs. But by giving people an opportunity to unplug from the drudgery, you give them space to take on the things they’re most excited about, like trying out a new technology they saw at a conference or an approach for how to build a relationship with a customer. It’s made Innovation Week an event that people now look forward to and get excited to be a part of, turning it into a real morale booster.

People are welcome to join a group where they see they have a unique perspective or talent to add. It adds richness to the process as well as the ideas the team comes up with because people work with others they don’t normally.

There’s a lot of cross-pollination happening. For example, someone from human resources joined the tech team and created a PowerPoint for their pitch because none of the developers knew how. It helps break down silos and creates more connections. It also helps that the executive team shows its commitment by being active participants. For some employees, this is the only chance they get to work shoulder-to-shoulder with someone from the C-suite.

Last is setting high-quality objectives so the problem is crystal clear to everyone.

Jeff pointed out that this came to light during the pitch stage. The teams that won were the best at defining the problem and then bringing it back to the experience of the users, whether that was a customer or something that internal people face.

“With innovation, having strong storytelling skills about the why, not just what your product does, is critical. You have to build the drama around the problem and then put it into the context of your customer. That’s crucial to getting people on board with the idea you’re trying to sell. At the end of the day, innovation is a sales job of your idea,” said Jeff.

Jeff and the team at ParkMobile are just one of the many case studies in my latest book, REThink Innovation. Now available for pre-order where all great books are sold.