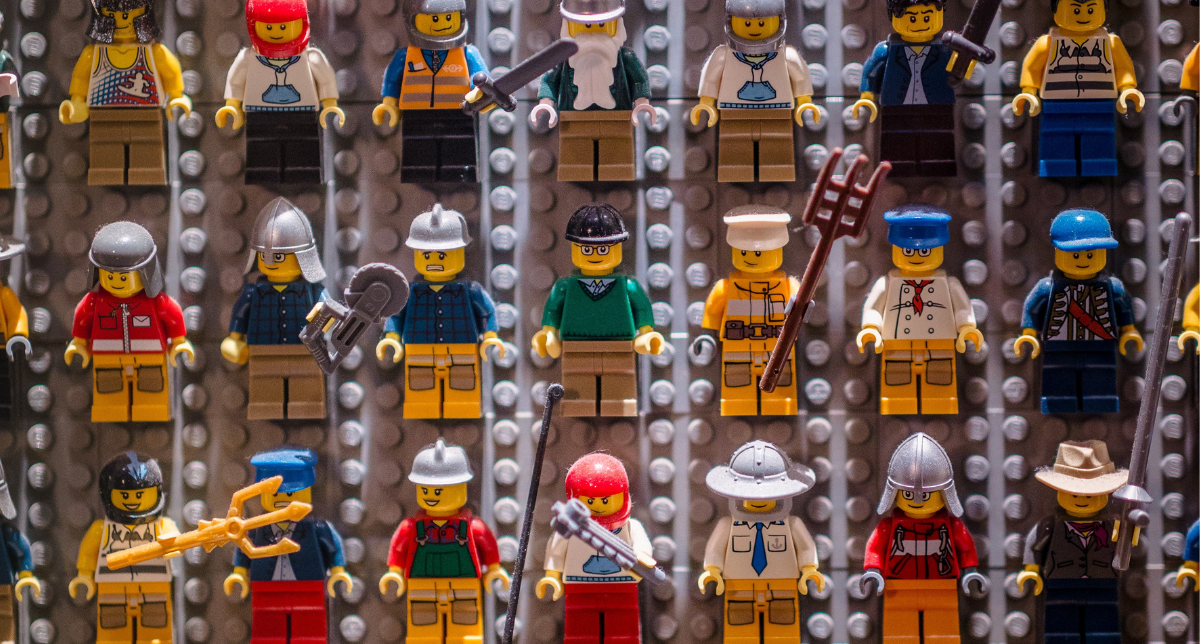 How does a company swing from scrapping together toys from actual scraps in the Great Depression to becoming a household name to nearly filing for bankruptcy to being one of history’s greatest innovation superstars?

By being really good at building, and rebuilding, one brick at a time.

I’m talking, of course, about LEGO.

LEGO wasn’t always an innovation success story. Like all large companies, they’ve gone through more than a few ups and downs. But somehow they always managed to turn things around.

Let’s take a look at how they consistently innovated their way into the hearts of kids and adults alike.

How LEGO built itself from nothing

LEGO bricks actually began as scraps of wood in 1932 by Danish woodworker Ole Kirk Kristiansen. Before making toys, he made practical objects like ladders, ironing boards, and farm equipment. The Great Depression made work scarce, so he switched to making toys since scraps were easier to come by than large bits of lumber. But even resourcefulness and innovation didn’t immediately save him. People considered toys a luxury in the Depression, and many of the folks in town couldn’t afford them. Ole often traded toys for food just to survive.

Fast forward to the 1940s and when the Nazis occupied Denmark. Not only was lumber crazy expensive, but Ole’s workshop also caught fire, and he lost his entire inventory and blueprints.

He managed to hold on to the business until the early 1950s when he met his next roadblock. World War II had made lumber nearly impossible for Ole to get his hands on. Instead, he used a new material: plastic. This is when he developed the patented interlocking system that made the LEGO bricks famously stackable.

By the 1990s, LEGO’s popularity took a hit. The digital era began eeking its way into kids’ games and quickly caught the eyes of the brand’s curious customers. Nintendo was the sexy new stud on the block. (Yes, I’m absolutely going to fit in as many puns as I can.) Small toy shops closed their doors thanks to heavy competition from big box stores like Toys ‘R Us.

LEGO tried to keep up with the new trends in toymaking, even getting into the video game business to keep up with Nintendo. But it quickly became a case of trying too many things, getting away from its core business, and stretching itself too thin.

Teetering on the edge, LEGO barely avoided bankruptcy in the early 2000s. But a few emergency loans kept it afloat long enough to simplify its business and get back to its roots. By chasing every trend in the world of toys, LEGO had lost sight of what they were good at. They recentered their business on their iconic building sets, launching franchise sets including Star Wars, Harry Potter, Indiana Jones, and many other cult favorites.

That one move saved the company.

The success of LEGO franchise sets gave the company enough liquidity to experiment again. But this time, they tried something they hadn’t done in years: openly accepting feedback from their fans. The relationship between customers and small toy shop owners used to be their main avenue for customer feedback. But thanks to competition from big box stores, small toy shops were closing and that invaluable feedback was lost. Until 1998.

In 1998, LEGO launched the Mindstorms robotics kits, a combination of hardware and software that let fans build robots using the iconic LEGO bricks. Just hours after the launch, thousands of hackers hijacked the software to make unauthorized modifications that gave new functions to the robots.

LEGO had a choice: prosecute the hackers… or embrace them.

LEGO recognized that they could collaborate with fans for feedback, and that would turn out to be invaluable.

They took a gamble and it paid off. Big time.

Using an open innovation strategy, LEGO re-launched the Mindstorms NXT series in 2006 which went on to become one of their biggest successes of all time. Why? They co-created with their customers.

LEGO used the feedback ecosystem they developed around the Mindstorms products as a model to create their now-famous culture of innovation. They started the LEGO Ambassador Program, which allowed fans to engage with the company around its kits. This continuous feedback loop gave LEGO tons of new ideas and partnerships, while making fans key decision-makers in the process.

Around the same time, LEGO started the crowdsourcing platform LEGO Ideas. The platform encourages fans to submit their ideas, and fellow fans can vote on which products they’d like to see put into production. Once an idea hits 10,000 votes, it moves on to a LEGO review board. If selected, the original creator receives 1% of the product’s revenue.

Using feedback from their fans, LEGO consistently churns out great idea after great idea. Go to their website and, besides ordering products, you can build things, share them with friends, and watch videos. Five times a year they publish a magazine that kids go crazy over. They produced Beyond the Brick: A LEGO Brickumentary – a documentary for adult fans of LEGO bricks. They’ve released Hollywood feature films that grossed hundreds of millions of dollars. Their YouTube channel has millions of subscribers. They have eight amusement parks. There’s even a game you can download from the app store.

All from a company that sells little rectangular pieces of plastic.

Not every company has the massive innovation budget of LEGO, or the decades of experience as an industry giant, or the rabid (and vocal) fan base. So what are some lessons any company can learn from LEGO’s giant success?

LEGO became famous for its iconic bricks. But over the years, chasing too many trends drove them away from their core business model. While sometimes shifting the entire company makes sense – especially when technology deems old product lines extinct – in LEGO’s case, it was unnecessary. It wasn’t until they recommitted to their building sets in the early 2000s that LEGO was able to become an innovation legend.

2) Listen to your customers, including your biggest critics

From bringing hackers on board in the 90s to LEGO Ambassadors to crowdsourcing ideas, LEGO became a model for open innovation. The constant feedback loop with their fans tuned LEGO into exactly what their customers wanted and sparked endless ideas. It doesn’t have to be complicated. If you listen to your customers, they’ll tell you what they want to buy.

3) Develop complementary offerings instead of reinventing the wheel

LEGO only really started becoming the innovation darling we know today once they started listening to their customers. And what did their fans want? More ways to enjoy LEGOs! From movies to theme parks, LEGO created tons of new ways to enjoy the brand that didn’t compete with their core products. And that last part is key. Not only are you competing with your rivals, but your company might also just be competing with itself.

4) Create a culture of innovation

Google’s corporate campus has nothing on LEGO’s. Little toy bricks are everywhere. LEGO encourages all its employees to play regularly and submit ideas. So not only do they source ideas from their fans, but from everyone at the company, as well. From Frank in Accounting to Nadia in HR, everyone is invited to make the company better.

Want to know more about how to create a culture of innovation like LEGO? Check out:

The Museum of Play: The Connection Between Play and Innovation

How to Create a Culture of Innovation

Why Innovation is Your Competitive Advantage