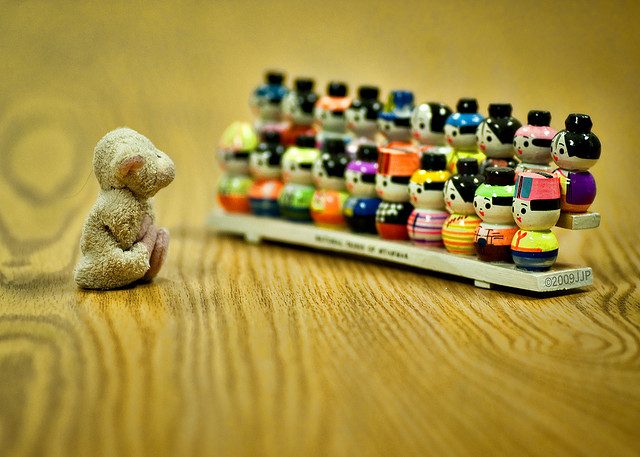 All the world’s a stage, and all the men and women merely players; they have their exits and their entrances; and one man in his time plays many parts, his acts being seven ages.
– William Shakespeare

A few years ago I worked with a telecom company that struggled to get traction with its audience. “We have a content marketing strategy,” the staff said. “We publish. We promote. We tell customer stories,” they said. “But things just fall flat.”

I told them I had a theory but wanted to do some homework.

There were 1,600 employees in the company and I made a series of incognito calls. I looked for toll-free 1-800 numbers on the website and called the main number to ask for a specific department. I talked to 17 people with different responsibilities – customer service, technicians, sales, accounting, assistants for some of the executive team. At some point during the conversations, I asked what they say when someone asks what their company does. Guess how many different answers I got? Pretty close to 17.

When I told the marketing team members this, I asked why they thought people couldn’t tell me what the company did.

They were truly surprised. They had sent all employees emails with press coverage and new customer acquisitions. They gave updates to department heads who said they shared it with their teams.

It never occurred to them in all of their external tale-telling to take measures to engrain the content mission in the minds of the most important audience – their employees.

All the world’s a stage
Depending on the on the source, research points out that customers are between 60 and 80 percent of the way through the buying process before they engage with a salesperson. The 2015 Edelman Trust Barometer shares that while people trust information from businesses and media less, they are putting more trust in what employees say.

To be able to deliver a remarkable customer experience, employees need to understand the purpose of the company and how their role supports the bigger picture. But a Gallup polls reveals a whopping 41% of U.S. employees don’t know what their employer stands for or what makes their company different from others. Just like the telecom company with which I was working.

41% of US employees don't know what their company stands for or what makes them different.
Click To Tweet

Teaching the players their lines
Just as customers want to self-educate, so do employees. They’re going to go someplace for information, why not their employer? Building & engaging internal audiences are keys to creating differentiating experiences for customers, prospects & other groups. The objective is to approach internal storytelling with the same strategy, rigor, and creativity as you do external storytelling.

BlackBerry (formerly Research In Motion) is a fabulous example of how a company can tap into storytelling to educate and inspire employees. The company that saw blistering revenue growth in the early 2000s found it couldn’t keep pace against sexier competitors like Apple and Android. Sales tanked and employee numbers shrank. By 2013, the company began to look for a buyer to take the company private.

Before that could happen, a new CEO with experience in turning around troubled companies was hired. In December 2013, one of his first actions was to send an open letter to customers and drive a stake in the ground about BlackBerry’s future:

“We are very much alive, thank you.”

“Our ‘for sale’ sign has been taken down and we are here to stay.”

Management realized that before BlackBerry could instill confidence in customers, it had to instill confidence in the employees. I asked Mark Wilson, senior vice president of marketing for BlackBerry, about how the company did this. He says that instilling the brand story – making BlackBerry synonymous with work tools – took center stage. From a brand-story perspective, Wilson wanted anyone looking for greater productivity, efficiency, security, and privacy to choose BlackBerry. And it required employees to understand and believe it before they could get customers to do the same.

While the CEO shared publicly his strong opinions about why employees were essential to executing a turnaround, it’s one thing to say it and another to execute it. As a high-profile brand with a huge social and blog audience (nearly 50 million social followers at the end of 2014 and 1 million blog readers a month), BlackBerry has an extensive audience to whom it could tell its turnaround story. But leaders knew the story would never become authentic if they weren’t able to tap employees to make the story come alive. Wilson knew this required proper execution and smart, consistent delivery.

“Many companies built their intranets in the late 1990s and haven’t invested to keep them current as an internal publishing tool. Our intranet (BlackBerry Square) is absolutely a critical part to telling our story to employees – it’s something that we take very seriously because it’s THE communication channel for us to connect with our internal audience. It’s not marketing hype, its interesting stories written from a journalism perspective.”
Mark Wilson, SVP Marketing, BlackBerry

BlackBerry has one person who sources content, writes, publishes, and operationalized the process for BlackBerry Square. The content is tracked in terms of views, comments, and likes to see what stories are trending, what gets comments, and what ideas reasonably engage the attention of employees. BlackBerry also uses tried-and-true email, town halls, and in-person meetings with employees and supervisors that cascade from the CEO’s team to talk about what’s going on in the company.

“Content marketing is as critical to employees as it is to customers,” Wilson says. “Just as you’re trying to drive engagement with your target external audience, you have to do the same thing with employees. They’re part of the conversation at all times, particularly in a turnaround. BlackBerry Square is our publication hub, and it looks, feels, and acts like a news site.”

Employees interact and contribute to conversations, even something as simple as liking an article, through BlackBerry Square.

“Similar to a customer’s journey with a brand, companies need to drive awareness, engagement, and conversion of the company’s strategy with employees to ensure that they viscerally understand it and how it benefits customers,” Wilson says. “Just as it’s critical to deliver on each step of the customer journey, it’s similarly critical to deliver on each step of the employee journey. Once this is in place, teams can focus on delivering outcomes that support the strategy rather than performing a set of disconnected activities. You have to keep pounding the awareness and engagement of the message and bake it into the culture.”

Ready for the spotlight
Marketers in any situation can learn a lot from BlackBerry. Wilson says the key has been the company’s ability to define a strategy and then communicate it effectively and consistently to many audiences. Employees have been one of the most important. To do that, the company clearly defined its story, told it with rigorous consistency, and then focused on operationalizing it in ways that drove growth and streamlined costs. Harnessing the collective influence of employees has given BlackBerry the ability to amplify the story through more people, making the new BlackBerry experience come alive for external audiences.

My question for you is who’s in charge of your employee storytelling?