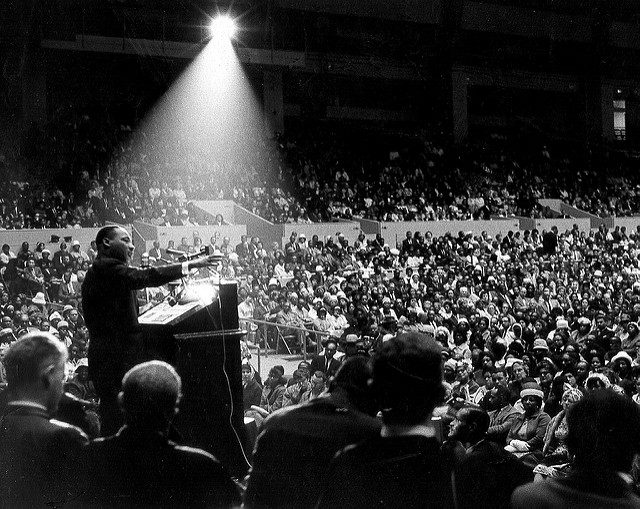 Martin Luther King, Jr. was one of the most influential storytellers of the 20th century. A pastor, activist and humanitarian, King’s “I Have a Dream” speech, Nobel Peace Prize lecture and “Letter from a Birmingham City Jail” are among the most revered orations and writings in the English language.

King wasn’t able to make America an equal place. But he did make the world a more equal one. His U.S. civil rights victories and speeches were inspirations for those who were involved in international race injustice. By 1964 the United Nations membership had doubled from its 1945 levels. Almost 75% of these new members were from developing countries who were committed to combating radical injustice based on the struggles of King in the U.S and the racial persecution in South Africa.

Martin Luther King didn’t change the world because of his ideals alone. He changed it because he was able to enrapture people with the stories he told and inspire them to take action. Dr. King was painted a picture of a future that mattered to people and then wrap it in emotion.

“I have a dream that my four little children will one day live in a nation where they will not be judged by the color of their skin but by the content of their character.”

B2B marketers shun emotion. But until we become passionate about our story and how it will change the world, we’ll never be able to capture the attention of people, countries and societies.

That’s too ambitious, you say?

Stories become real when they have empathy for their audience. When they connect to what matters in our lives. (I’m going to share an incredible secret here…what people do at work is part of their lives.) Stories tell us how to behave. And they remind us what to believe.

Here’s five things that Dr. King did very well that every B2B marketer can begin to do right now:

If you’ve never watched or heard Dr. King’s I Have a Dream speech, here it is. Listen to the beauty of the picture he paints of the future with these five storytelling techniques.

Visit The King Center to learn more about the life and influence of Dr. Martin Luther King, Jr.